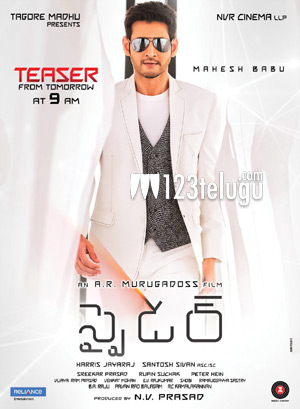 Fans of Superstar Mahesh Babu are eagerly waiting for the teaser of the actor’s upcoming spy thriller, Spyder. The teaser will be released tomorrow on the occasion of Mahesh’s birthday.

Today, the makers released special posters, announcing the time of the teaser’s release. This much-awaited teaser will be hitting YouTube at 9 am tomorrow. Buzz is that there will not be separate teasers for the Telugu and Tamil versions.

Directed by AR Murugadoss, Spyder is produced by Tagore Madhu and NV Prasad. Rakul Preet is the film’s leading lady and Harris Jayaraj is the music composer. The film is releasing on September 27.