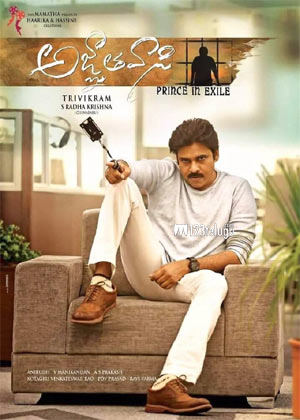 Ending the months-long surprise, the makers of Power Star Pawan Kalyan’s landmark 25th movie have finally unveiled the film’s title, though after a minor delay. There are no last minute surprises as the film has been titled Agnyathavasi as it’s being speculated over the past few months. The first look was released in the holy city of Varanasi.

Agnyathavasi’s first look showcases a classy Pawan Kalyan in a software professional avatar. The curiousity evoking tagline ‘Prince In Excile’ bears Trivikram’s mark and sets the mood and expectations right for the film. Meanwhile, the movie’s unit is going to kick-start the final schedule in Varanasi today.

Keerthy Suresh and Anu Emmanuel are the film’s leading ladies. S Radhakrishna is the producer and Anirudh Ravichander is the music composer. Agnyathavasi is slated to hit the screens on January 10 as a Sankranthi treat.