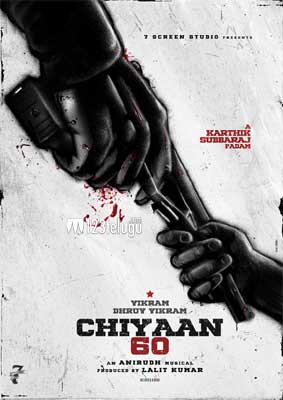 From the past few weeks, news has been spreading that Tamil star Vikram will collaborate with talented director Karthik Subbaraj for his 60th project.

News is also that the film also stars Vikram’s son Dhruv Vikram in the key role. Confirming the same, this afternoon, Karthik Subbaraj made an official announcement and revealed the complete details of the film along with a concept poster.

As expected Rockstar Anirudh will be scoring music for the film. Master fame Lalit Kumar and Seven Screen Studio will be bankrolling the project, jointly.

Happy to announce that my next directorial after #JagameThandhiram is…. 'CHIYAAN60'#Chiyaan60

And it will be an @anirudhofficial musical..

So excited for this film…. pic.twitter.com/Oof0je5Eg4