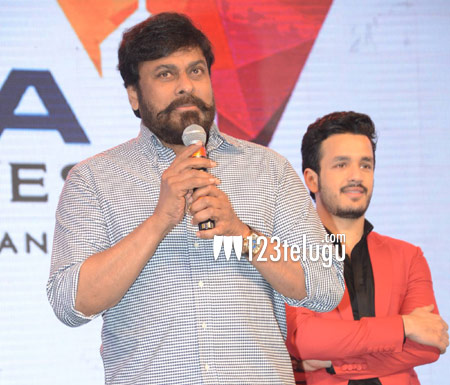 Megastar Chiranjeevi was the chief guest at Akhil Akkineni’s soon to be released film Hello’s pre-release event that was held last night. Speaking at the event, Chiru said that he has watched Hello yesterday morning and that the film was a fantastic and flawless love story.

Chiru hailed Hello’s director Vikram Kumar’s craftsmanship in carving out a brilliant film that excelled in all departments. “I couldn’t control my tears after the movie ended,” the Megastar said, further saying that the chases and action sequences in the movie offered a never before experience.

Talking about Akhil, the Sye Raa hero said that Akhil rocked with his dances and pleasantly surprised him with his talent. “Akhil will reach the next level with Hello. Heroine Kalyani acted very well. She will attract the young audience,” Chiru said. Produced by Nagarjuna, Hello is slated for release on December 22.