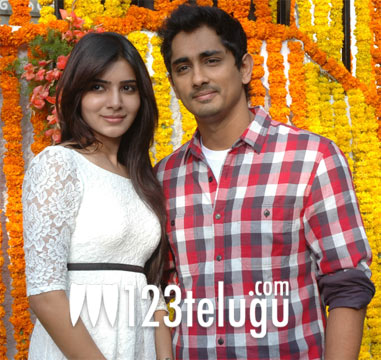 Siddharth, Samantha and Nithya Menen starrer Jabardasth is gearing up for its big release early next year. Nandini Reddy has directed this film and this is the second film as a director after she made a sparkling debut with Ala Modalaindhi. Bellamkonda Suresh has produced the film. The entire shooting was wrapped up earlier this month and post production is going on in full swing. The music has been scored by Thaman and the latest news is that he has completed the final mix of the album. “Jus completed with #Jabardasth audio will be realeasing shortly 🙂 it was super fun working with Nandhini reddy 🙂 given my super best,” Thaman posted on Twitter.

The film’s audio is likely to be launched in early January and the film will hit the screens shortly after that. Buzz is that Samantha is playing the role of a Muslim girl and there’s even a Qawwali song in this romantic entertainer. More details about the film are awaited.