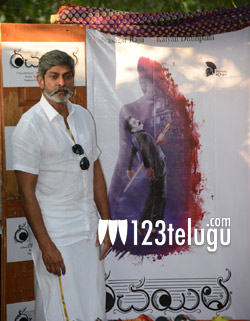 Recently, on the occasion of completing three decades in movies, senior hero Jagapathi Babu said that he will support small movies that are struggling to get a decent release. Keeping his word, Jagapathi Babu today announced that he has ‘adopted’ the recently launched small film, Rachayitha.

After unveiling Rachayitha’s poster in Hyderabad, Jagapathi Babu said that a few good films sank without a trace due to poor release and zero promotions. “Lack of theaters and no distributors coming forward to buy these films are the main reason for this situation. My movement is all about safeguarding the small films,” Jagapathi Babu said.