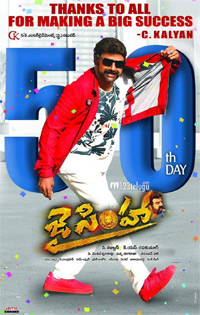 Sankranthi was a mixed bag for fans and the Telugu film trade circles. While Pawan Kalyan’s Agnyaathavaasi turned out to be a colossal failure, Suriya’s Gang and Nagarjuna’s home production, Rangula Raatnam, too, failed to set the cash registers ringing.

It was Balakrishna’s mass action entertainer, Jai Simha, that entertained the masses apart from making big bucks at the box-offices across the twin Telugu states. Today, Jai Simha completed its 50-day run in several theaters in AP and Telangana.

This KS Ravikumar directorial has collected over 28 crore share in is full run and ended up as the lone Sankranthi winner. C Kalyan is the film’s producer. Nayanthara, Hariprriya and Natasha Doshi are the leading ladies Jai Simha.