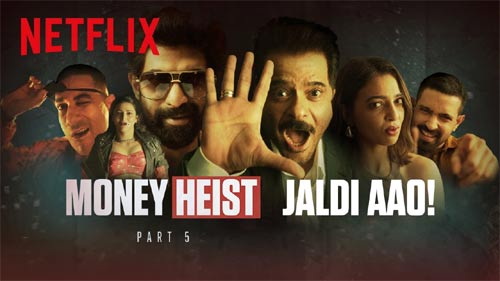 The Volume 1 of the 5th season of Money Heist, one of the most popular Netflix shows, is all set to premiere on Netflix on September 3. Money Heist lovers across the country have been eagerly waiting for the fifth season to drop at the earliest. And Netflix India has roped in several popular stars to come up with a fun, Desi version of the show’s super hit anthem, Bella Ciao.

Titled Jaldi Aao, the Desi anthem has been composed by Nucleya and it features Bollywood stars Anil Kapoor, Radhika Apte, Indian cricketer Hardik Pandya, South stars Rana Daggubati and Shruti Haasan. All these stars can be seen singing Jaldi Aao in Hindi, Telugu and Tamil as they join Money Heist fans in their desperate wait for the show. These stars also pay tributes to the slain members of the resistance, Nairobi, Olso, Berlin, while Professor makes an appearance at the end of the video.