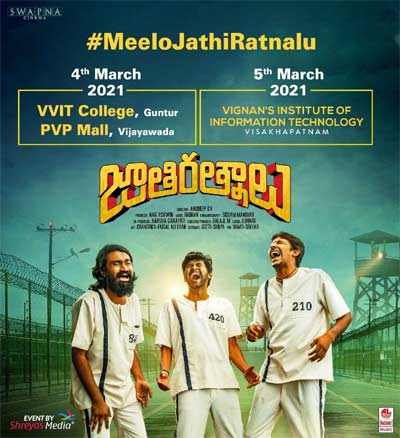 Hero Naveen Polishetty’s upcoming comic caper, Jathi Ratnalu, has been creating a lot of buzz for the last few days. The film also features young comedians Priyadarshi and Rahul Ramakrishna in lead roles, while young actress Faria Abdullah is making her Tollywood debut with this movie.

Jathi Ratnalu’s team has been aggressively promoting the film through social media and TV and web interviews. Furthermore, the team is all set to go on a promotional tour in the key Andhra towns like Guntur (VVIT College) and Vijayawada (PvP Mall) on March 4th. And on the 5th, the team will interact with the students at Vignan’s Institute of Information & Technology in Vizag.