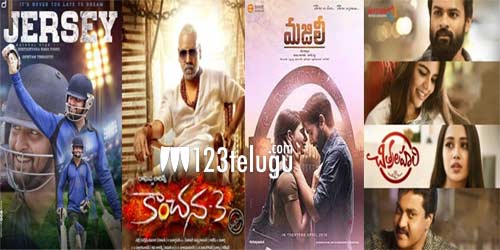 Nani’s Jersey, after a solid start, has been affected by Lawrence’s Kanchana 3 to a huge extent all over the twin Telugu states on weekdays. On Thursday, in Krishna district, Jersey collected a share of Rs 5.97 lakhs, taking its 7-day Krishna share to Rs 1.05 crores.

On the other hand, Kanchana 3 collected Rs 4.44 lakh share on its 7th day in the Krishna region. The film’s total first week Krishna share is Rs 97.83 lakhs. The film is performing quite well despite facing a tough competition from Jersey.

Coming to Naga Chaitanya and Samantha’s blockbuster romantic drama, Majili, the film collected Rs 61,970 on its 21st day and ended up with a 3-week total Krishna share of Rs 1.77 crores. The film has given a solid boost to Chay’s career.

Finally, Sai Dharam Tej’s Chitralahari has completely slowed down in Krishna district. The film could only collect Rs 3,910 on Thursday. The film’s total 2-week Krishna share is Rs 75.08 lakhs. Chitralahari will not reach its break even mark in the region.