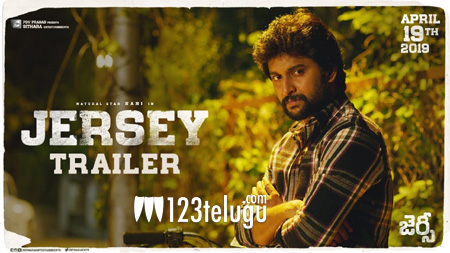 The much-awaited theatrical trailer for Nani’s soon-to-release sports drama, Jersey, is out finally. The trailer showcases Nani as Arjun playing dual avatars – one that of a hot-headed young cricketer and the other a middle-aged father who takes up cricket again to prove himself in the eyes of his son.

Jersey’s trailer is inspirational and emotional at the same time. It’s Nani’s show out-and-out and he’s sure to make the audiences go emotional as he struggles to find his place in the Indian cricket team. Anirudh Ravichander’s background score adds to the emotional drama in the trailer.

Kannada actress Shraddha Srinath gets a meaty, author-backed role on her Tollywood debut. Director Gowtam Tinnanuri has a promising film on his hands. The film is produced by Suryadevara Naga Vamsi under Sithara Entertainments banner. Jersey is hitting theaters on April 19.