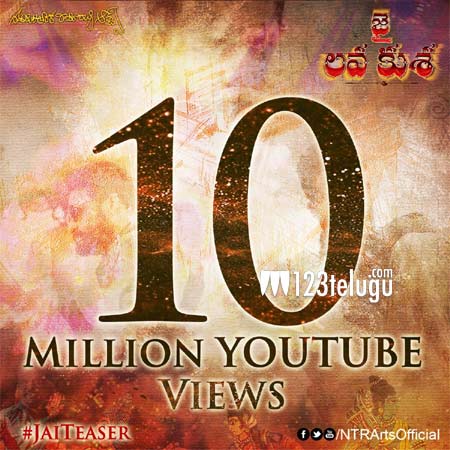 Looks like there’s no stopping the teaser of Young Tiger NTR’s upcoming action entertainer, Jai Lava Kusa. After smashing all the social records in South India, JLK’s teaser has now pulled off yet another sensational feat.

JLK’s teaser has clocked more than 1 crore views on its official YouTube channel alone. Incidentally, the teaser had clocked 1 crore digital views (YouTube + Facebook) within 48 hours of its release, a never before feat for any South Indian film.

The teaser was NTR’s one man show. He took the fans’ expectations to the next level with his menacing portrayal of the evil Jai. The grand sets and DSP’s terrific background score were other attractions in the teaser.

Bobby is directing the film and Kalyan Ram is producing it. Raashi Khanna and Nivetha Thomas are the film’s leading ladies.