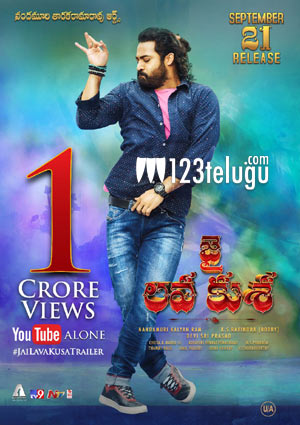 NTR is on top of his game currently as all his past few films have become huge hits. His new film, Jai Lava Kusa has been making a lot of noise all over and the latest trailer which has released recently has crossed the one crore digital views in no time.

This clearly shows that the audience is quite eagerly awaiting for this film all over. NTR will be seen in three different roles and the unique promotions of the film have been the main cause for this extreme buzz.

All the three teasers which were launched one after other setting the tempo for the film quite nicely. Bobby directs this film which is produced by NTR Arts. Raashi Khanna and Nivetha Thomas are the female leads.