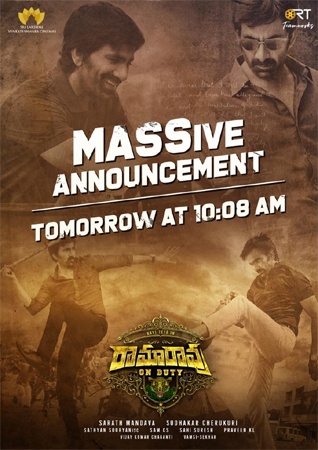 Mass Maharaja Ravi Teja’s upcoming movie, Ramarao On Duty, written and directed by debutant Sarath Mandava is in news again. Billed to be an action drama, the movie has Divyansha Kaushik and Rajisha Vijayan as the female leads.

The makers of the movie took to social media and announced that they are going to come up with a massive update tomorrow at 10:08 AM. It is heard that the update is about the release date. However, we need to wait for what the team has in store for us to reveal.

Venu Thottempudi, Nassar, Tanikella Bharani, Pavitra Lokesh and others are also a part of this high-voltage action movie. Produced by Sudhakar Cherukuri’s SLV Cinemas in association with RT Teamworks, this film has music by Tamil composer Sam CS.