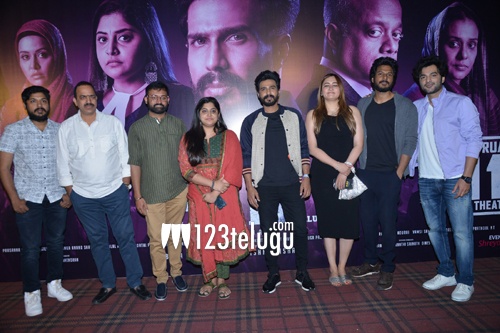 Kollywood actor Vishnu Vishal’s upcoming movie, FlR, is ready for release in theatres on February 11, 2022, in Tamil and Telugu. On this occasion, a grand pre-release event has been held at AMB Cinemas in Hyderabad today.

Speaking to the media, actor Vishnu Vishal has promised that he will do a straight film in Telugu for sure. The actor has mentioned that Ravi Teja liked the movie very much and said he will present the movie in Telugu. Vishnu said that Ravi Teja is like his elder brother, who has great energy and humour.

Speaking about FIR, the actor revealed that he never wanted to release it on OTT because he has great confidence in the content of the film and thus waited for a good time to release it in theatres only.

Talking about Gutta Jwala, his wife, he noted that she is her strength and she is one of the reasons for the theatrical release of the movie in theatres. He also added that Jwala warned him that she will never talk to him if he won’t release it in Telugu. She saw the movie 20 times, revealed the FIR actor.

Directed by Manu Anand, the movie, produced by the actor, has Manjima Mohan, Gautham Vasudev Menon and others in significant roles.