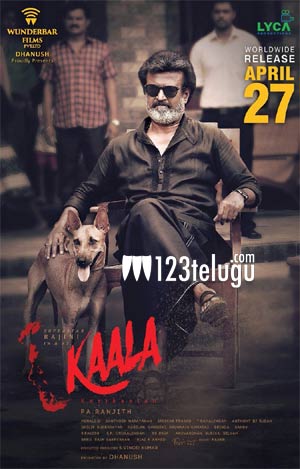 Super Star Rajinikanth’s upcoming gangster drama, Kaala, is one of the most eagerly awaited movies in the first half of 2018. The film’s release date has been a huge topic of discussion ever since Rajini’s yet another highly-anticipated magnum opus, 2.0, had missed the April deadline due to a delay in the VFX work.

Now, confirming the ongoing buzz, Kaala’s makers have just announced that the film will be released on April 27, which means that a clash is inevitable between Kaala, Mahesh Babu’s Bharath Ane Nenu and Allu Arjun’s Naa Peru Surya. A rocking poster showcasing Rajini in a powerful avatar has along been released along with the release date.

In the meantime, Kaala is fast wrapping up its post-production formalities at a jet speed. In Kaala, Rajini will be seen as a Dharavi slumlord turned politician. Stalwart Bollywood actor Nana Patekar, Huma Qureshi and several other prominent actors essay crucial roles in the movie. Pa Ranjith has directed Kaala and Rajini’s son-in-law and actor Dhanush has produced the movie.