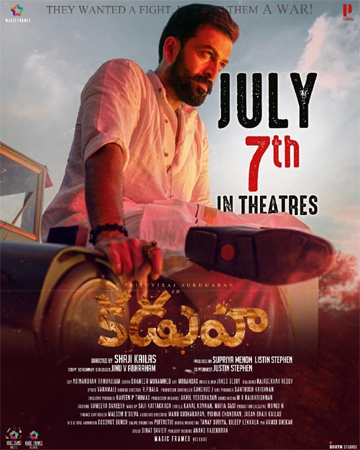 Prithviraj Sukumaran starrer Kaduva is all set to hit the screens on 7th July. There were rumors floating around social media today that the movie got postponed again. Delay in opening online ticket bookings is one reason for this.

Meanwhile, the actor took to his Twitter handle and clarified that Kaduva will be released as per the scheduled date. He further mentioned that the movie completed its censor and was given a U/A certificate from the censor board.

Prithviraj also apologized to his fans for keeping them waiting so long. The production house tweeted that legal procedures caused this delay. The movie is helmed by Shaiji Kailas and it has Samyuktha Menon and Vivek Oberoi in other key roles.

Jakes Bejoy is composing the music. The film is produced jointly by Prithviraj Productions and Magic Frames. The film will be released in multiple languages.