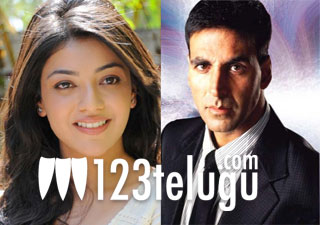 Lady luck definitely seems to have a special place in her heart for Kajal Aggarwal. This year, she’ll be seen in some of the biggest projects in Telugu and Tamil including films opposite NTR, Pawan Kalyan, Ram Charan Tej, Vijay and Suriya. The latest news is that she has finally signed her second Hindi film. After making her debut in Singham where she played the lead role opposite Ajay Devgan, she got plenty of offers; however, she rejected most of them. Almost a year later, she is all set to romance Akshay Kumar in a thriller titled Special Chabbis. Neeraj Pandey, who had earlier made A Wednesday, is going to direct the film.

Apparently, Special Chabbis is based on a real-life daring heist in 1987 where an unknown man posing as CBI officer Mon Singh recruited 26 men and executed a daylight raid on the Opera House branch of Tribhuvandas Bhimji Jewellers in Mumbai, and disappeared with jewellery worth lakhs. Kajal is the only actress in the film amidst 26 men and the buzz in Bollywood is that Akshay Kumar recommended her for this film. She will reportedly join the film’s sets from March 1 onwards. With such big projects in her kitty, there’s no denying that 2012 is turning out to be quite a fruitful year for Kajal.