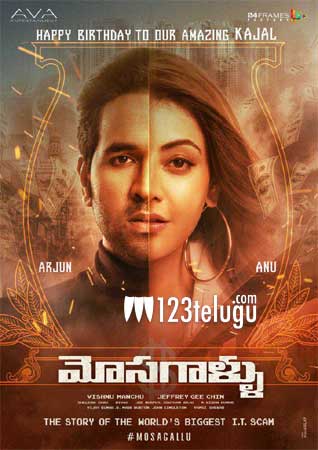 It is a known fact that Vishnu Manchu is doing a film called Mosgallu, which is based on the so-called world’s biggest IT scam. The film also features Kajal as the lead.

On the eve of Kajal’s birthday, the team of Mosagallu unleashed an interesting poster where Kajal is seen in a serious avatar. She plays a corporate head called Anu in the film which is a crime thriller.

Vishnu himself produces this film that has completed 80% of its shoot. Jeffrey Chin is directing this film which also has Navdeep and Sunil Shetty in key roles.