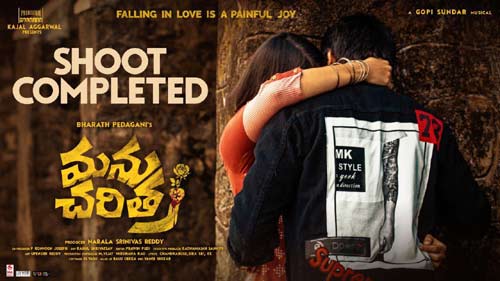 It is known that star heroine Kajal Aggarwal is foraying into film production by presenting the upcoming romantic action drama, Manu Charitra. Starring young actors Shiva Kandukuri, Megha Akash, Priya Vadlamani and Pragati Shrivastav in lead roles, the film’s intense and intriguing preface was unveiled a couple of weeks ago to a decent response.

Manu Charitra’s shooting formalities have been wrapped up with a special ceremony at Peddamma Temple in Hyderabad. The movie’s unit will complete the post-production work at the earliest to release the film in theaters later this year.

Manu Charitra is being directed by debutant Bharath Pedagani and produced by N Sreenivasa Reddy on Apple Tree Entertainments banner. Gopi Sundar is composing the music. The unit will announce the release date soon.