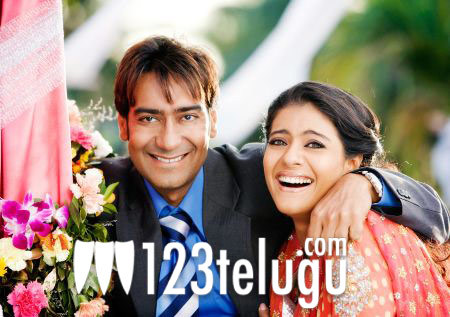 Dusky beauty Kajol has joined her hubby Ajay Devgan in being a small but vital part of ‘Makki’, the Hindi version of our Telugu blockbuster ‘Eega’. The movie is being readied for a Hindi release and Ajay Devgan has given the voice over in the opening moments of the film, as a father who narrates the story of ‘Makki’ to his daughter. Kajol has chipped in to provide the voice for the mother’s character.

A very happy S.S.Rajamouli thanked the star couple on Twitter and expressed his gratitude. “Thanks a lot @ajaydevgn for the voice over. And cherry on top is Kajol did the VO for the mother. makkhi will have a gr8 start. am i happy?”, he tweeted.

After taking the Telugu Film Industry by storm with its performance, ‘Eega’ a.k.a. ‘Makki’ is gearing up for release on October 12th in Hindi and the makers of the film are expecting a similar blockbuster peformance