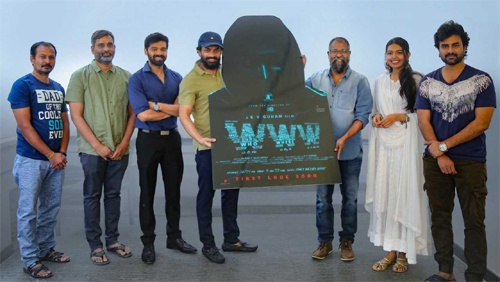 It’s well known that ace cinematographer KV Gugan, who had earlier directed Nandamuri Kalyanram’s 118, is currently helming his second directorial venture. Titled WWW, the film is touted as a unique thriller. The film’s title logo has been unveiled by Kalyanram this morning.

Speaking at the logo launch, Kalyanram said that Guhan had given him a memorable hit in his career. He went on to say that he has knows WWW’s story and that it’s a very good one and has all the chances to become a big hit.

WWW features young actors Arun Adith and Shivani Rajashekar in lead roles. Dr. Ravi P. Raju Datla is bankrolling the film under Ramantra Creations banner. The shooting has been wrapped up and the post-production work is underway in full swing. Vijay Dharan Datla is co-producing the movie.