That legendary actor-filmmaker Kamal Haasan has inspired a generation of actors and filmmakers is an undisputed fact. A few days ago, when Dasavatharam turned 13, Kamal took to Facebook and shared his experiences while making the film.

And Kamal finally responded to Alphonse’s post and obliged his request. “Thank you Alphonse Puthren. Will do soon. I don’t know how much of learning it will be for you. For me, it was, as I had mentioned, a masterclass. Talking about it after years teaches me new lessons,” Kamal told Alphonse.

On the work front, Kamal is currently busy with the pre-production formalities of his soon-to-commence action thriller Vikram. On the other hand, Alphonse is working on his next directorial. Titled Paattu, the film features Fahadh Faasil and Nayanthara in lead roles. 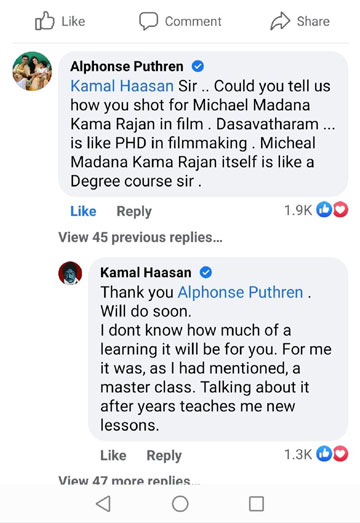