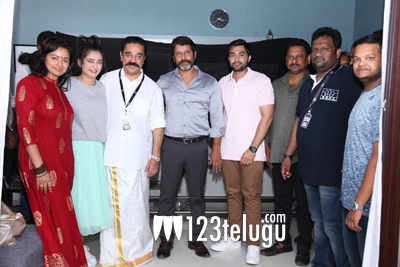 Earlier this year, we had reported that Kamal Haasan will be producing a movie with star hero Chiyaan Vikram. The latest we hear is that the film was launched earlier today in Chennai.

Kamal himself was present at the occasion and launched the film in style. Rajesh M Selva who made Cheekati Rajyam with Kamal will be directing this film which also has Kamal’s daughter, Akshara Haasan as the female lead.

The shooting of this film will kick-start next month in a specially erected set in Chennai.