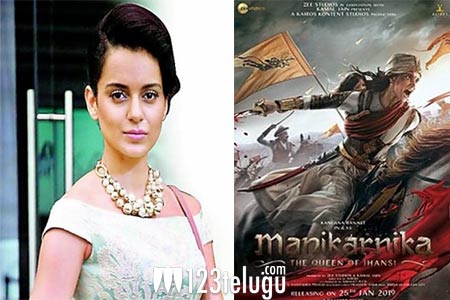 Ever since Krish moved on to direct NTR biopic after finishing bulk portions of Manikarnika, there have been a lot of rumours that all’s not well between him and Kangana Ranaut. Adding fuel to the fire, several actors walked out of the film stating that the film had changed considerably compared to what they were narrated. If this wasn’t enough, Kangana took over the reins to direct the rest of the film, and the film’s trailer credits both Krish and Kangana as the film’s directors.

In a recent interview to a leading news portal, Kangana opened up about why she had to direct the film and quashed rumours that she and Krish had creative differences over the film. “Krish had to leave the project as he took over the NTR biopic and due to factors beyond our control, the shooting of Manikarnika kept getting delayed. When the film was conceived, some other person was supposed to direct it. You cannot have the best understanding with everyone you meet. I was forced by the circumstances to take up such a big budget film. There is no problem with Krish, and we are sharing the director’s credit,” Kangana said.

The film narrates the story of Queen Laxmibai of Jhansi and how she sparked a revolution against the British rule in India. The big-budget period drama is slated for release on January 25.