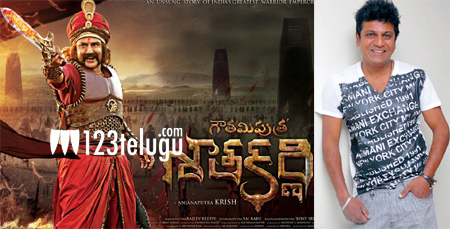 We have recently reported that Kannada superstar Shivarajkumar will be donning a special role in Nandamuri Balakrishna’s prestigious 100th movie, Gautamiputra Satakarni.

The latest update from the movie’s unit is that the Sandalwood star will be joining the unit from next week. Even though there have been reports that Shivarajkumar will be essaying the role of Gautamiputra Satakarni’s grandson in the film, an official confirmation is awaited.

Krish is directing this most awaited historical drama and Rajeev Reddy is producing it. Shriya and Hema Malini will be seen in important roles in this epic war drama.