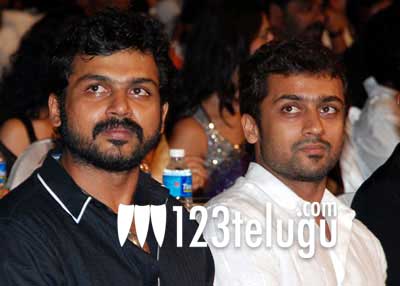 Karthi has lent his voice for one of the roles which Suriya is playing in KV Anand’s upcoming film Brothers. We had earlier reported that Suriya is dubbing for himself for the first time in Telugu. Since he’ll be seen as conjoined twins, K V Anand convinced Karthi to dub for the other character of Suriya. Interestingly, Karthi makes it a point to dub for all his films which are released in Telugu and it has helped him immensely to expand his market in Andhra Pradesh. With Suriya jumping into the same boat as his brother, it’s only going to get better for Suriya. Kajal is playing the lead role in this action entertainer. Bellamkonda Suresh is distributing the film across Andhra Pradesh. Harris Jayaraj has composed the music. The film is expected to release on October 12.