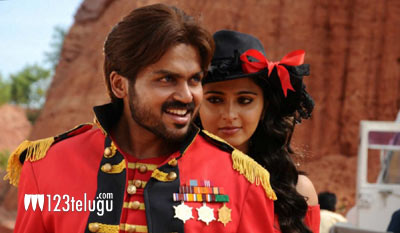 Anushka’s reputation as one of the most professional actresses in film industry today needs no introduction. All her co-stars and directors vouch for her no-nonsense, no frills attitude towards her work and that aspect of her off screen personality has kept her in good books from the beginning of her career. Couple of months ago, Selvaraghavan praised her for her professionalism on the sets of Brindavanam Lo Nandakumarudu and now, Anushka has a new fan in Karthi.

The duo has teamed up for the first time for Suraaj’s upcoming film titled Bad Boy. Apparently, there were quite a few risky stunts in the film and Anushka didn’t think twice about performing all of them on her own along with Karthi. Talking to a leading newspaper, Karthi revealed, “The film involved physically demanding chases, reverse driving, rolling down hills, diving into the waters, and Anushka did them all without a murmur. Her commitment is amazing.”

Bad Boy’s Tamil version titled Alex Pandian is one of the most awaited Tamil films of the season and it’ll release on January 12 and the Telugu version is expected to release on January 25. Gnanavel Raja has produced the film and Devi Sri Prasad has scored the music.