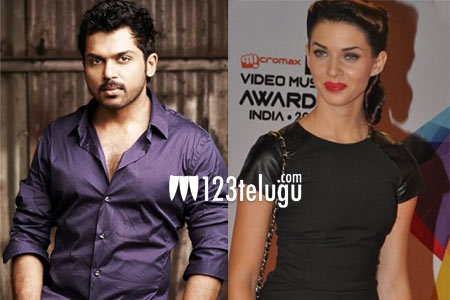 Remember Scarlett Mellish Wilson, the item girl who sizzled in Pawan Kalyan’s Cameraman Ganga Tho Ram Babu. Well, she has got a good offer and is doing yet another item song in a Tamil film now.

Scarlett is currently shooting with star hero Karthi for his new Tamil film. The shoot is currently on in a fort in Rajasthan. Karthi will be seen in a cop’s role in this film which also has Rakul Preet as the female lead.

Senior choreographer, Brinda master is executing this stylish number where a lot of junior artists are also taking part. H Vinod is directing this film which has been titled ‘Dheeran Adhigaram Ondru’.