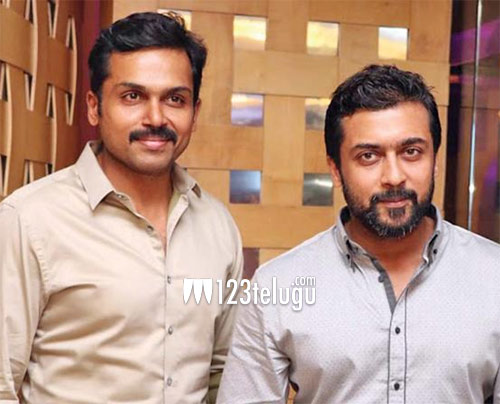 Tamil star Suriya has been going through a lean phase for the last few years, with none of his movies setting the box-office on fire. Following Kaappaan’s (Bandobast in Telugu) debacle, there has been a lot of curiosity about his next project.

Until recently, Suriya was rumored to be teaming up with either his Singam franchise director Hari or Viswasam fame Siva for his 39th film. However, with Siva choosing to work with Rajinikanth for his next, it is being speculated that Suriya will eventually be teaming up with Hari.

Now, Suriya’s brother Karthi himself has spilled the beans on Suriya’s next project. During Khaidi’s pre-release event in Hyderabad this evening, Karthi confirmed that Suriya will be acting under Hari’s direction in his 39th project.

Needless to say, fans can once again expect an out-and-out mass action entertainer from the Singam duo. But whether this film will be the 4th installment in the Singam franchise or not will be known in a few days.