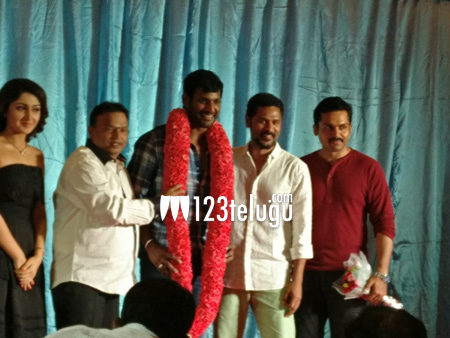 Sayyeshaa, who was last seen in Akhil, is making waves in Tamil film industry. After bagging the lead role in AL Vijay-Jayam Ravi’s Vanamagan, the actress will next be seen in Prabhudeva’s upcoming film which has Vishal and Karthi in lead roles.

At the film’s press conference earlier today, when the whole team got togther for the film’s official announcement, Vishal said, “I have never seen anyone dance like Sayyeshaa since Simran. Karthi is going to have a tough time matching her dance moves in the film.” In return, Karthi too stated that Sayyeshaa dances like a dream and he’s looking forward to shake a leg with her.

AL Vijay, who was the chief guest at the event, said that Sayyeshaa is here to stay in Tamil cinema and added that she’s extremely hard-working. The actress recently stunned everyone at Zee Apsara Awards and quite a few Telugu filmmakers too are said to be showing keen interest in signing her for Telugu films. It remains to be seen what Sayyeshaa does next in Telugu cinema.