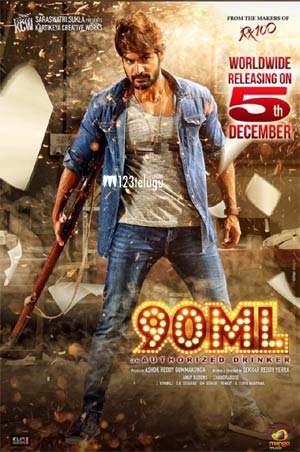 Hero Kartikeya’s youthful entertainer, 90ML, has locked its release date. The film will be hitting screens worldwide on December 5. After RX 100, Ashok Gummakonda is bankrolling this project under debutant Shekhar Reddy Yerra’s direction.

In 90ML, Kartikeya plays a happy-go-lucky youngster who claims to be an ‘authorized drinker’. The film’s AP and Telangana theatrical rights have been acquired by Sri Vyshnavi Entertainments. Debutant Neha Solanki is the female lead in the movie.

A couple of songs composed by Anup Rubens’ were released recently and they received a decent response. The trailer will be out soon.