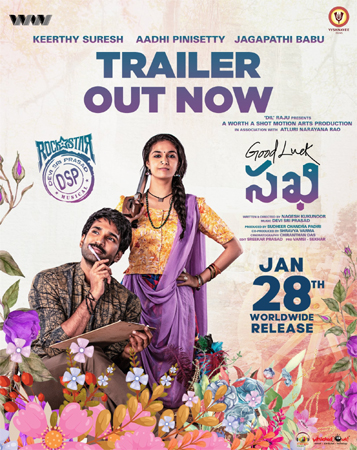 Everybody is aware that National award winner Keerthy Suresh is playing a shooter in her upcoming movie, Good Luck Sakhi. Directed by Nagesh Kukunoor, the movie’s theatrical trailer is out today.

The trailer starts with Jagapathi Babu. He decides to make the best shooters India should be proud of. Aadhi Pinisetty suggests a village girl, Sakhi (Keerthy Suresh). Everyone in the village treats her as bad luck. Jagapathi Babu trains her and makes her popular in the shooting sport. How Jagapathi Babu changed her fate and made everyone call her good luck is the story we need to watch on big screens.

Though it’s a familiar story, the dialect and the mischievous acts of Keerthy Suresh as Sakhi make the promising trailer look a decent one. It seems that the emotional part will become a major highlight in the movie. Devi Sri Prasad’s background score is good.

Produced by Sudheer Chandra, the sports drama also has Rahul Ramakrishna in a crucial role. The movie is all set to hit screens on January 28, 2022.