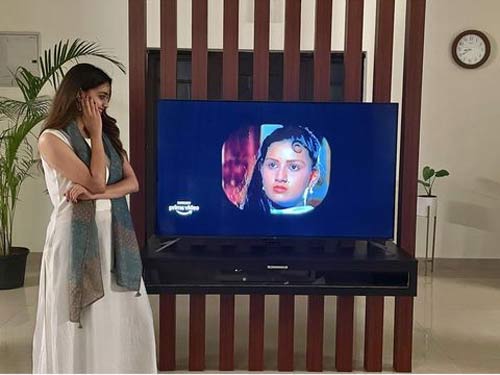 Actress Keerthy Suresh took to Instagram and shared a photograph with her fans. The picture has Keerthy amusingly looking at her mother and yesteryear heroine Menaka Suresh’s picture in the upcoming Malayalam crime thriller, Bhramam, in amazement.

“Maa! How did you end up in the world of #Bhramam?,” posted Keerthy, also tagging the film’s hero and Malayalam star Prithviraj Sukumaran, asking him, “am I seeing this right?” Well, fans will have to wait until Bhramam premieres on Amazon Prime Video on October 7.

Bhramam is an official remake of the acclaimed Bollywood crime thriller, Andhadhun. The film also features Raashi Khanna and it is directed by ace cinematographer Ravi K Chandran.