Keerthy Suresh’s natural look from her next is impressive
Published on Oct 17, 2019 9:11 am IST 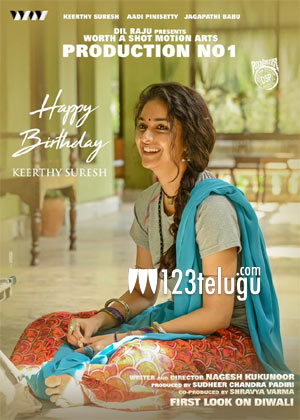 Happening young heroine Keerthy Suresh celebrates her birthday today. On this occasion, the makers of Keerthy’s ongoing romantic sports comedy unveiled a poster that revealed her look in the movie.

In the poster, Keerthy looked at her natural best sans any makeup or glitter. The film’s first look poster will be out on Diwali. This as-yet-untitled film also features Aadhi Pinisetty and Jagapathi Babu in key roles. Popular Bollywood director Nagesh Kukunoor is making his Tollywood debut with this film.

Leading producer Dil Raju will be presenting the film. Devi Sri Prasad is the film’s music composer. Sudheer Chandra and Shravya Varma are jointly producing the movie under Worth A Shot Motion Arts banner.