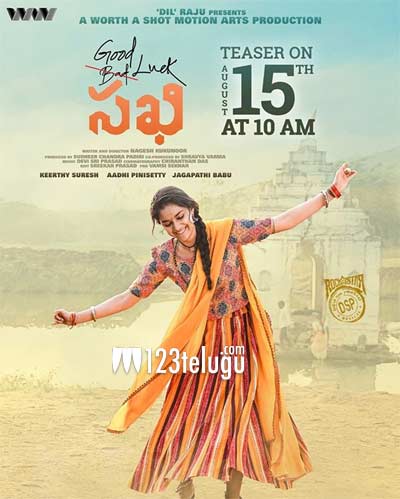 It is a known fact that Keerthy Suresh is doing a film in the direction of Nagesj Kukkunoor, the national award winner. The film is titled Good Luck Sakhi. The film is a multi-lingual film being made simultaneously in Telugu, Tamil, and Malayalam.

The makers have announced to release the film’s teaser at 10 AM on August 15th as Independence Day special. The poster sees Keerthy Suresh as a rural girl. Keerthy Suresh will be seen as a shooter and DSP scores the music.

Popular producer Dil Raju is presenting the film while Sudheer Chandra Padiri is producing it on Worth A Shot Motion Arts banner. Aadhi Pinisetty and Jagapathi Babu are the other prominent cast in the Sports rom-com backdrop project.