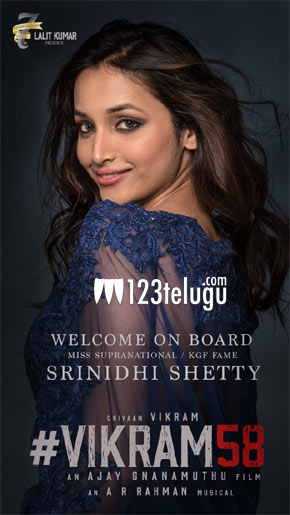 Mangalore girl and Miss Supranational 2016 Srinidhi Shetty had made an impressive debut with the 2018 blockbuster, KGF Chapter 1. The actress will next be seen in KGF Chapter 2, which will hit screens in summer next year.

Meanwhile, the makers of Tamil star Chiyaan Vikram’s much-awaited 58th film have officially announced that Srinidhi Shetty has been roped in to play the female lead in the movie. This film marks Srinidhi’s Kollywood debut.

Young filmmaker Ajay Gnanamuthu is directing the film and Lalith Kumar is bankrolling it. AR Rahman is scoring the soundtrack. Former Indian cricketer Irfan Pathan will be seen in an antagonist’s role