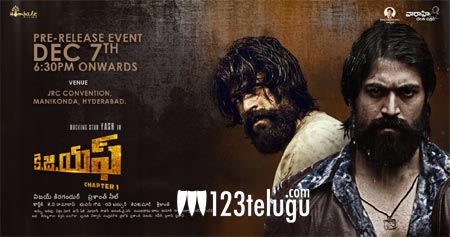 No Kannada film, in recent times, has created as much buzz as Yash starrer KGF has. Directed by Prashanth Neel, the film is going to be released in five languages on December 21, and it has already become the most watched trailer of all time in Kannada after it crossed the 10 million views mark recently.

Given the hype that the film managed to get post the trailer launch in early November, the team is going on a major promotional drive across languages to grab more eyeballs. As part of this plan, a pre-release event is going to be held in Hyderabad on December 7. Sai Korrapati is releasing the film in Telugu and several celebrities are expected to attend the event.

The film is set in the backdrop of Kolar gold fields and how one man rises against all odds to save scores of people working in the mines. Srinidhi Shetty is going to make her acting debut with this film.