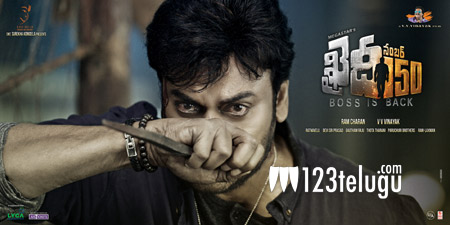 The success of Khaidi 150 once again proves the saying of old is gold. Chiru has made a staggering comeback to Tollywood as hit new film, Khaidi No 150 has crossed the total share of 100 crores today.

This is no mean feat as very few films in Tollywood have achieved this 100 crore mark. This, once again proves that Chiru is indeed the king of box-office when it comes to films. The mass entertainer with a social message was received tremendously by both the mass and class audience alike.

Even in the overseas areas, the film did extremely well and created many records. Directed by V V Vinayak, Khaidi 150 is still going strong in many single screens of the Andhra region.

Ram Charan produced this film which was a remake of Tamil film Kaththi. There was so much doubt about the film’s collections as the project was sold for some hefty prices before the release.

Now, with the film crossing the hundred crore mark, the entire clan of distributors is very happy with the film.