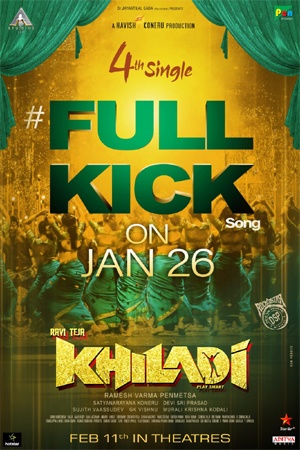 Mass Maharaja, Ravi Teja’s upcoming movie, Khiladi, is in news again. After releasing 3 songs, the makers have decided to release the fourth song, which is a mass number.

To make Ravi Teja’s birthday more special, the makers have announced that the ‘Full Kick’ song will be out on January 26. Composed by Devi Sri Prasad, the duet has the vocals of his brother Sagar and Mangli. Shree Mani has penned the catchy lyrics for the song.

Dimple Hayathi and Meenakshii Chaudhary are playing the female leads in this Ramesh Varma directorial.

Anasuya Bharadwaj, Unni Mukundan, Vennela Kishore and others played key roles in this movie, which is scheduled to release on February 11, 2022.