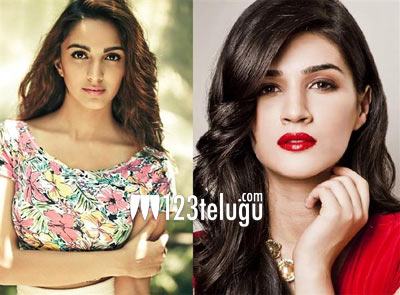 Sajid Khan’s Housefull 4 is makes waves in Bollywood. The film has Akshay Kumar, Abhishekh Bachchan and Ritesh Deshmukh playing the lead roles, along with Bobby Deol who has been roped in for a crucial role. The latest news is that the film, apart from Jacqueline Fernandez, will also star Kiara Advani and Kriti Sanon in lead roles.

Incidentally, both Kiara and Kriti Sanon have done a film each with Mahesh Babu when they made their debut in Telugu. While Kiara will soon be seen in Bharath Ane Nenu, Kriti Sanon shot to fame with 1-Nenokkadine before she made it big in Bollywood.

Buzz is that Kriti is paired opposite Akshay Kumar in this hugely successful franchise and it certainly looks like Kriti’s popularity in Hindi cinema is growing from strength to strength after she impressed the audience and critics alike in Bareilly Ki Barfi last year.