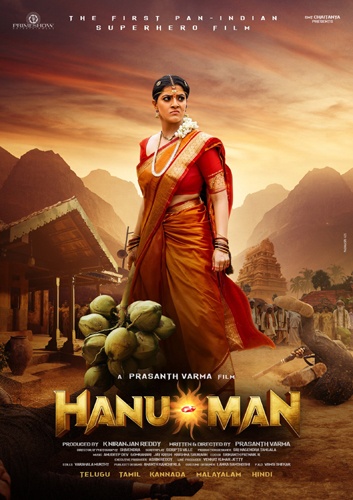 Young and talented actor Teja Sajja and successful director Prasanth Varma are coming up with the first Pan-Indian superhero film HANU-MAN, which is going to be another first of its kind film on Indian screen. The film will be released in all south Indian languages and Hindi.

Today, Kollywood Baadshah Kiccha Sudeep launched her first look of Varalaxmi Sarathkumar, who is playing Anjamma character, a day prior to her birthday. Varalaxmi appears in a bride costume with a bunch of coconuts in hand. Looks vicious, she is seen taking on some thugs near a temple.

Amritha Aiyer is playing the female lead in this movie, which has already made massive non-theatrical business.

Primeshow Entertainment is producing the movie on a grand scale. The high-on VFX movie has four music composers – Anudeep Dev, Hari Gowra, Jay Krish and Krishna Saurabh. The movie is currently in the last leg of its shoot and in the meantime, the post-production works are also happening.