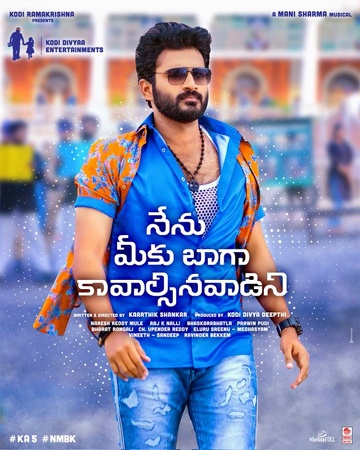 Today, the makers have announced the name of the movie and also released the first look poster. Directed by the debutant Kaarthik Shankar, the movie is titled, Nenu Meeku Baaga Kaavalsinavadini. Besides, the first look showcased Kiran Abbavaram in a mass avatar.

Kannada actress, Sanjana Anand, is making her Tollywood debut with this movie, bankrolled under the banner Kodi Divyaa Entertainments. SV Krishna Reddy, Sangeetha, Sameer, Siddarth Menon, Baba Bhaskar and others are also a part of this flick.

Presented by Kodi Ramakrishna, the film has the music of Melody Brahma, Manisharma. The movie’s shooting was already completed. More details about the movie will be announced in the coming days.