Kondapolam making video: A thrilling adventure in jungle
Published on Oct 6, 2021 7:12 am IST 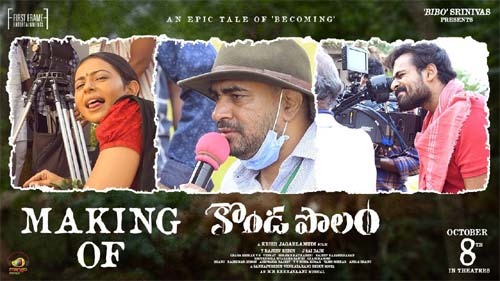 Young hero Vaishnav Tej and Rakul Preet Singh’s rural action drama, Kondapolam, is all set to hit the big screens on October 8. With just a day left for the release, the makers are promoting the film quite aggressively.

Kondapolam makers have just launched a small making video. The video shows how the team had toiled to shoot the movie in difficult conditions (raging pandemic and incessant rains) in a forest a few months ago. The video assures audiences a thrilling adventurous ride in cinemas.

Directed by Krish, Kondapolam is an adaptation of Sannapureddy Venkataramireddy’s book of the same title. Saibabu and Rajeev Reddy have produced the movie. MM Keeravani is the music composer.