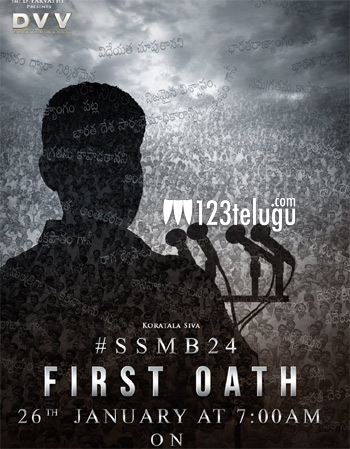 The shoot of Superstar Mahesh Babu’s ongoing film, Bharath Ane Nenu, is nearing completion. The makers have already kick-started the promotions and they will be releasing the film’s first oath voice tape along with a poster tomorrow at 7 AM as a Republic day special.

Meanwhile, the film’s director Koratala Siva took to Twitter a while ago and clarified that Bharath Ane Nenu is a fictional political drama that happens in undivided Andhra Pradesh. He also added that the entire unit is quite excited to share the first oath audio tape, which will be released at the same time on various social media platforms, FM channels and audio streaming apps.

Bollywood starlet Kiara Advani is the film’s heroine and DSP is the music composer. DVV Danayya is bankrolling this high-budget entertainer, which is scheduled for an April 27th release.