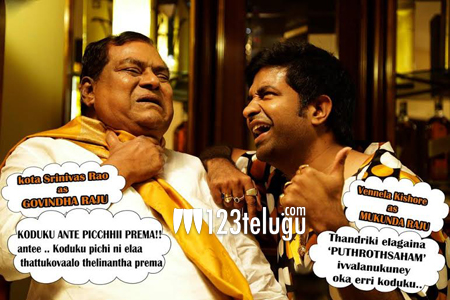 Actors Kota Srinivasa Rao and Vennela Kishore will be playing important roles in the film ‘Run Raja Run’ and their comedy is going to be a big highlight for this stylish romantic film.

They will be seen as father and son. Kishore will be in a role of a son who wants to please his father at any cost and Kota will be seen in the role of a father who cannot take so much love from his son.

The scenes involving these two have come out well, according to sources. The film is a Sharwanand starrer and Seerath Kapoor is the heroine. Ghibran composed music for this UV Creations production.