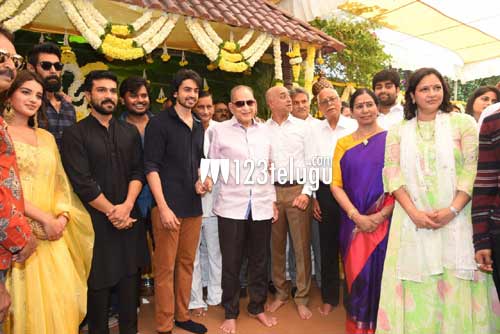 Mahesh Babu’s nephew Ashok Galla’s debut film had its launch in a grand manner this morning in Hyderabad. Ashok’s grandfather Superstar Krishna led the proceedings by handing over the script to the film’s director Sriram Adittya and producer (his daughter Padmavathi Galla) during the puja ceremony.

Later, chief guest Ram Charan sounded the clap and Rana Daggubati switched on the camera for the first shot. All the celebrities wished Ashok and the entire team a grand success. Ashok’s father and Guntur MP Jayadev Galla, senior hero Naresh and several other celebrities and family members were also present at the launch.

Nidhhi Agerwal is the female lead in this as-yet-untitled film, which is touted as a thriller. Ghibran is the music composer.