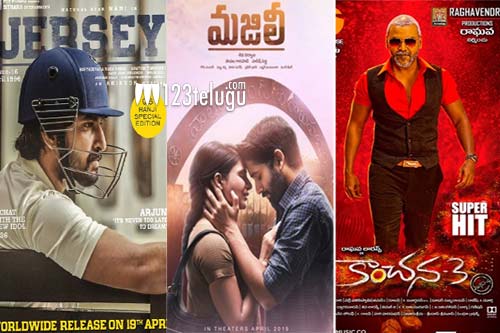 On day 1, in Krishna district, Jersey collected a decent distributor share of Rs 33.80 lakhs. Thanks to the glowing reviews, the film is expected to collect huge over the weekend. On the other hand, Kanchana 3 performed equally well and collected Rs 30.13 lakh share in the Krishna region, which is Rs 3.67 lakh share less than Jersey’s day 1 collections.

Clearly, Majili, Jersey and Lawrence’s Kanchana 3 have had a neck and back battle on day 1 in Krishna district, while Chitralahari lagged behind in the race. With the elections fever coming to an end and the IPL still posing a tough challenge, the box-office performance of Jersey and Kanchana 3 remains to be seen.