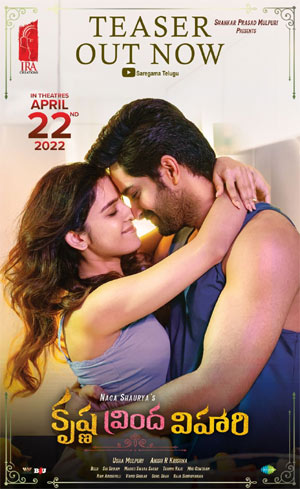 Naga Shaurya and Shirley Setia starrer Krishna Vrinda Vihari is all set to release in theaters on April 22, 2022. Ahead of that, the makers have released the teaser.

Launched by Anil Ravipudi, the teaser showcases the romance and the chemistry between the lead pair. Naga Shaurya looks handsome and Shirley looks beautiful. The teaser reveals that Shirley loves him but doesn’t like to marry him. To know what exactly the point is, we need to wait for the main film. The teaser looks good and the visuals are rich. The background score by Mahathi Swara Sagar is so good.

Vennela Kishore, Rahul Ramakrishna, Satya and others are also a part of this movie.Directed by Anish R Krishna and produced by Usha Mulpuri under Ira Creations, the film has cinematography by Sai Sriram.