Krishnarjuna Yuddham is Nani’s biggest US release
Published on Apr 6, 2018 8:20 am IST 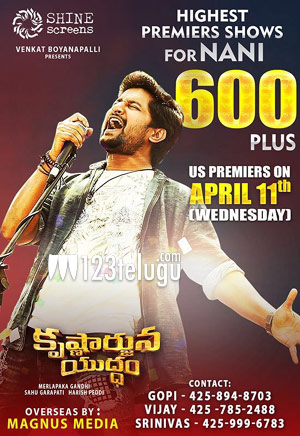 Nani’s upcoming film, Krishnarjuna Yuddham, is hitting the screens on April 12. Nani essays dual roles after a long time and that’s the main USP of the movie. He will be seen as a Chittoor district youth in one role and a Prague-based rockstar in the other.

The latest update is that Krishnarjuna Yuddham is going to be Nani’s biggest release ever in the US. The film will have a whopping 600 plus premiere shows on the night of April 11. The recently released audio album, composed by Dhruva fame Hip Hop Tamizha, has become a huge hit.

Anupama Parameswaran and Ruksar Mir are the leading ladies in KAY. Merlapaka Gandhi is directing the movie, which is produced by Sahu Garapati and Harish Peddi in Venkat Boyanapalli’s presentation.